The 5th European Greenways Conference held in Madrid from the 10th to the 12th of June brought together more than 160 people from 12 countries, focussing on pathways and cycling routes. Participants included policy makers and experts from European Greenways, European tourism authorities and representatives of State and community governments involved in planning, building, maintenance, management and promotion. 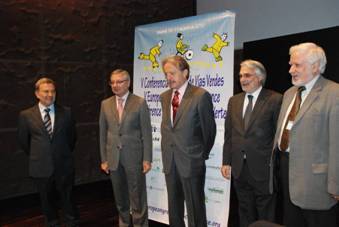 Photo: Dignitaries at the Greenways Conference.

The 5th European Greenways Conference held in Madrid from the 10th to the 12th of June brought together more than 160 people from 12 countries, focussing on pathways and cycling routes.

The Conference was organized by the Spanish Railways Foundation (FFE) and the European Greenways Association (EGWA) and was sponsored by ADIF (Spain), Spanish Biodiversity Foundation (Spain), ONCE Foundation (Spain), the Interministerial Coordination for the Development of Cycling of the Ministry of Sustainable Development (France) and the Walloon Region (Belgium) with the collaboration of other entities and national and international agencies.

Spanish Public Works Minister, José Blanco, inaugurated the Conference, and began by recalling that since 1993 the Spanish Government is working on the development of Greenways in order to obtain the maximum historical, social and environmental use of these former railway lines. Ever since, greenways are being enhanced as a tool for promoting a new leisure and sport culture and non-motorized mobility. He also stressed that "Greenways are a great source of wealth and job creation in the rural areas they cross. Creating and promoting a greenway contributes to the establishment of population in rural areas."

During the opening ceremony, the director of "New Approach Industries, Tourism and CSR" of the DG of Enterprise and Industry of the European Commission, Pedro Ortún, stressed that the aim of the Conference and the Greenways Programs fully fits the European model of sustainable tourism in its three dimensions: economic, social and environmental. President of ADIF, Antonio González, explained the role that ADIF has had all over the seventeen years since the establishment of the first greenway. Also, the regional representative for Europe of the World Tourism Organization, Eduardo Fayos, insisted on the fact that Greenways are a great bet for a new tourism model to be promoted in the coming years, for being linked to sustainable rural development.

These personalities were accompanied by President of the European Greenways Association (EGWA), Gilbert Perrin, and the managing director of the Spanish Railways Foundation (SRF), Jaime Barreiro.

After the opening ceremony the issue of the European dimension of Greenways was addressed by Pedro Ortún, director of Tourism of the European Commission, who announced that a new model of European policy on tourism is being prepared. Greenways will contribute to this new model, not only in helping to achieve the objectives in tourism, but also the objectives of the European Strategy for 2020. He also presented a new call of the Prize of destinations of excellence, and stressed: "I hope to see some winners amongst Spanish Greenways or other member country Greenways." 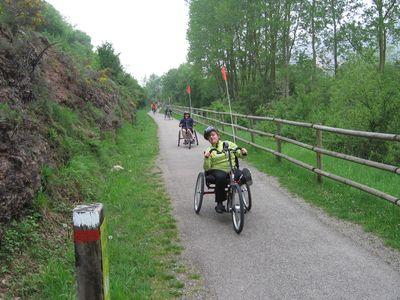 During the first session several examples of National Greenway Programs were presented: Spain, with 1.800 kms of greenways along disused railways tracks, the Portuguese “Ecopistas” promoted by the national railways company REFER, and the ambitious French Plan for a cycling trails and greenways network.

As part of the second session of the conference, representatives of railway companies from Italy, Belgium, Spain and Mexico, presented Greenways as elements of heritage preservation and new uses for rail infrastructures. Another major issue of the Conference was undoubtedly tourist promotion of these routes, for which several presentations were developed, including one on the jointly promotion of all the routes done in Spain by the Spanish Railway Foundation (SRF), another on tourism certification model tied to Greenways in the Czech Republic, and two examples of the French case related with tools for promotion given by users association, and the strategic plan in Brittany.

During the last session of the day the role of greenways in networks and long-distance routes was raised, with examples like the Natural Trails Plan of the Spanish Ministry of the Environment and Rural and Marine Affairs, with a planned investment for the works launched in 2009 of 13 million € and an additional investment of 9'9 million € for the maintenance of these routes. It is important to underline the support of the European Parliament representative, Michael Cramer, to these initiatives and his presentation of the "Iron Curtail Trail”, which runs along the disappeared European Iron Curtain.

Ambitious Eurovelo project, and its complementation with Greenways was present by the European Cycling Federation; also the trans-border program in the Walloon Region with specific examples of greenways connecting neighbouring countries. It was clear that Greenways and European cycle route network do not understand about borders, and are also a wonderful opportunity to create links between territories and populations, and so to build a better Europe.

Friday morning was devoted to analysis of the social and economic benefits of greenways, with interesting contributions as those made by the president of the International Federation of Pedestrians, who particularly stressed the importance of considering the needs of pedestrians in all mobility projects benefiting citizens. The representative of the World Health Organization stressed the importance of physical activity for healthy living habits and informed on the methodology and systems developed to quantify this importance.

Regarding economic impact, very convincing data on the Danube bike path was presented. In 2008 there were 838 direct and 1,400 indirect jobs created along the most popular par, running 340 kilometres from Passau to Vienna.

Regarding the Girona Greenways (about 120 km in total length) there are 1.5 million estimated uses per year. The Sierra Greenway Foundation focused their presentation on explaining the creation of 31 direct jobs and many others generated indirectly, thanks to the Greenway in these rural localities.

While France presented a complete and detailed survey about Burgundy cycling tour, that permitted to state that the public investment is recovered in 1 year; their users have spent 34.9 M€ in 2009; Greenways are the most popular routes used in this network due to their safety as off-road itineraries.

Lincolnshire County is the only area in the UK to have a county-wide waterway regeneration strategy, with a strong community involvement. Water Rail Way counts with nearly 80.000 annual usages mainly for leisure (98 %) but also for commuting (28%); for 82% of users, these paths have helped them increase their physical activity.

The last session of the Conference focused on universal accessibility and Greenways. The Director General of Transport of the Valencia Region insisted that Greenways are to be used by everyone and presented the new Regional Law on accessibility, a pioneering piece of legislation, which aims to make accessible all the Valencian regional transport system.

On this particular issue, the director of accessibility of the ONCE Foundation and ENAT Vicepresident, stressed the importance of the "chain of accessibility", ie you have to take care of all aspects (from prior information to complementary equipment) to make Greenways truly accessible routes.

The Gaves Greenway, located near the French town of Lourdes, is undoubtedly an example for other greenways in the field of accessibility: 8% of its visitors are wheelchair users. Finally, Predif representative (non-profit association representing European people with physical disabilities) emphasized the concept of "tourism for all" and brought to the audience the everyday problems encountered by persons with disabilities.

As a perfect end for the day, the closing ceremony featured a video message from the EU Environment Commissioner Janez Potočnik, who emphasized the important contribution of Greenways to address environmental problems of great significance as the fight against climate change, CO2 emissions and the need to move towards a model of tourism and sustainable mobility.

The V European Greenways Conference concluded with a technical visit of the speakers and assistants of the conference (about 70 people), as well as a group of journalists, to the Vía Verde de la Jara (Toledo), a Spanish example of tourism and economic revitalization of a region through a greenway.