The EU Commits to Sustainable and Responsible Tourism

In its first meeting after the coming into force of the Treaty of Lisbon, EU Tourism Ministers approved the “Madrid Declaration”, making a series of recommendations to the European Commission to implement a European tourism policy for the first time in the EU's history. 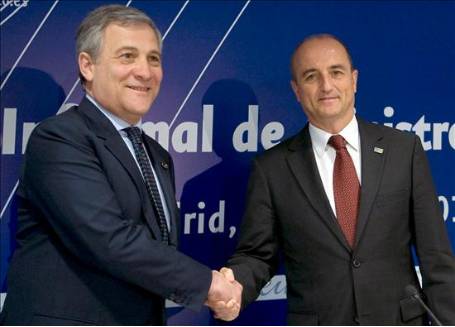 The Spanish Minister of Industry, Tourism and Trade, Miguel Sebastián, and the Commissioner for Industry and Entrepreneurship, Antonio Tajani, greet each other before the start of the press conference. Photo: EFE

In its first meeting after the coming into force of the Treaty of Lisbon, EU Tourism Ministers approved the “Madrid Declaration”, making a series of recommendations to the European Commission to implement a European tourism policy for the first time in the EU's history.

After giving congratulations for the inclusion of tourism in the Treaty of Lisbon, the Spanish Industry, Tourism and Trade Minister, Miguel Sebastián, stated that it is necessary “to move from words to events” and that the Madrid Declaration “a first step in the commitment of the EU and all member states to sustainable, modern and socially responsible tourism.”

“The European Union commits to social tourism”, underlined the Minister. For him the sector “should be an asset all citizens can enjoy, in particular those with physical disabilities or financially disadvantaged.”

The Vice-president of the Commission and Commissioner for Industry and Entrepreneurship, Antonio Tajani, stressed this idea and stated that “we work to turn every European citizen into a tourist.”

Both also coincided on the fact the ageing of the European population allows for policies that contribute to the sector no longer being seasonal and makes it possible for tourism to be maintained in the low season.

The declaration places emphasis on the role of innovation and information and communication technologies for maintaining the competitiveness of tourism companies, largely SMEs, in a globalised economy. In this respect, Commissioner Tajani expressed his satisfaction of “inclusion of the word tourism, also for the first time, in the EU 2020 Strategy" and indicated that awarding credits to SMEs will be dealt with by the Commission in a meeting in Brussels on 9 May.

Europe as a tourist brand

This gives rise, said the Minister, to the need for a new visa policy that “does not strangle demand” from the new tourist-generating countries, especially India, China and Russia.

Making progress in consumer protection by harmonising legislations, as well as integrating sustainability in tourism-related sectors, was also discussed  (transport, waste treatment, water management, among others).

The Spanish Presidency presented the Europe Senior Tourism project in the meeting. This is a pilot experience that facilitates the transfer of European citizens to Spanish destinations in Andalusia and the Balearic Islands, and will shortly also include the Canary Islands.

According to the Minister, a total of 50,000 Europeans from 16 countries (Slovakia, Netherlands, Belgium, Poland, Slovenia, Hungary, Italy, Austria, Greece, Portugal, Denmark, France, Czech Republic, Romania, Bulgaria and Ireland) have travelled to Spain under this programme.

Commissioner Tajani said he was convinced that the Madrid Declaration is a decisive contribution to “Communication on the EU's new tourist policy framework”, that the Commission will present to the European Council before the end of the year.

Download the Madrid Declaration in PDF format from the right-hand panel.

Excerpt from the Declaration:

"With a view to the “Communication on the renewed EU Tourism Policy Framework”, which the Commission is to present before the EU Council, the Tourism Ministers meeting in Madrid wish to invite the Commission to take into consideration the pertinence of:

(3)  Facilitating the access to holidays to groups with impaired mobility or those who are socially and/or economically disadvantaged, promoting as the same time a better and more prolonged use of tourist infrastructures, the maintenance of tourist activity in the regions for longer periods, and a strengthening of the feeling of European citizenship".