World Day of Persons with Disabilities: Slope lift and new routes to the Acropolis opened by Prime Minister, Mitsotakis

3 December 2020, Hellenic Ministry of Culture press release. In the presence of the Prime Minister Kyriakos Mitsotakis, the Minister of Culture and Sports Lina Mendoni and the President of the Onassis Foundation Antonis S. Papadimitriou, today, the International Day of Persons with Disabilities, the elevator and the new footpaths were inaugurated. 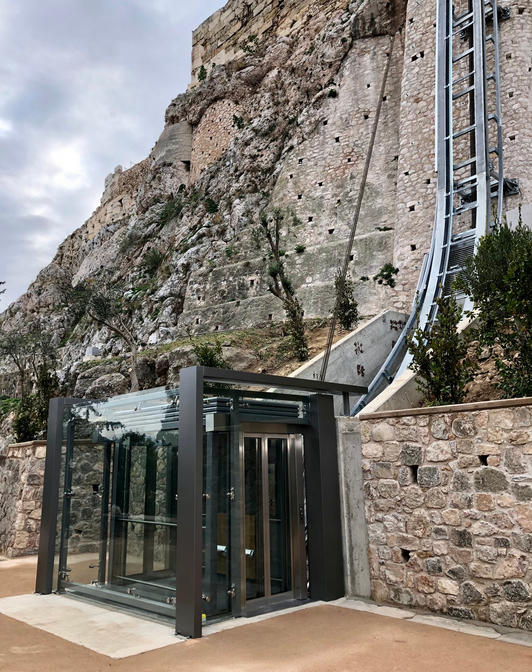 In the presence of the Prime Minister Kyriakos Mitsotakis, the Minister of Culture and Sports Lina Mendoni and the President of the Onassis Foundation Antonis S. Papadimitriou, today, the International Day of Persons with Disabilities, the elevator and the new footpaths were inaugurated.

The project significantly improves access to the monuments on the Holy Rock, being part of the programme to upgrade the services provided on the Acropolis. Thus, the archeological site becomes completely accessible for people with disabilities and also for all citizens with mobility or other problems.

Acropolis: More Accessibe for All. Video by Onassis Foundation On YouTube. 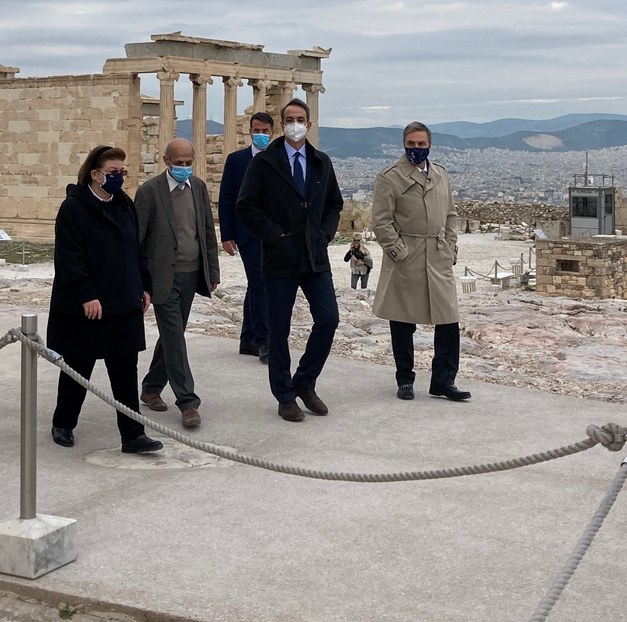 Today is indeed a great day, a bright day, a day that proves once again in practice, that the Greek State, the state can cooperate with Institutions that share the same goals, the same vision, the same philosophy and perform in the world society, not only in the Greek society, a very important project. Today, December 3, World Day of Persons with Disabilities, we inaugurate the new elevator and the routes which have been designed with great care, in order to make the Acropolis accessible to all and everyone. To people with mobility difficulties, but also to our elderly fellow citizens who want to enjoy the symbol of Western Civilization, without the difficulty involved in the classic route to climb the Acropolis Rock.

The government has already consulted the National Plan for the Rights of Persons with Disabilities. At the core of this plan is the concept of accessibility. Accessibility to all, accessibility everywhere. And because this government does not like words, but speaks with deeds, we are very glad that today we are making available to the public this important, this emblematic work, which could not be done without the support of the Onassis Foundation.

With great pleasure I will have the opportunity to be the first to use the elevator and to tour the routes which - I want to say it again - have not just been designed, but have been built with full respect for the law and, of course, under the supervision of the emblematic teacher, Mr. Manolis Korres, who I believe knows and loves the Acropolis perhaps more than anyone. I say this because it is with regret that I have found in recent months that cheap opposition criticism has been exercised even for this project, which is a universal project and under normal conditions should unite us all.

The government, obviously, will not stop here. The National Plan for the Rights of Persons with Disabilities has been and remains a personal commitment of mine. You know, I think, the reasons why I am particularly sensitive to this issue and I believe that today we are taking an important first step in putting it into practice.

Once again, Mr President, in your person I would like to thank you, all your associates, all the companies that worked to complete this extremely difficult and demanding task on schedule in conjunction with the work of lighting the new Acropolis. Today, the Acropolis shines brighter than ever, but also more accessible than ever.

Thank you very much again."

Statement by the President of the Onassis Foundation, Antonis S. Papadimitriou

Honorable Minister of Culture and Sports, 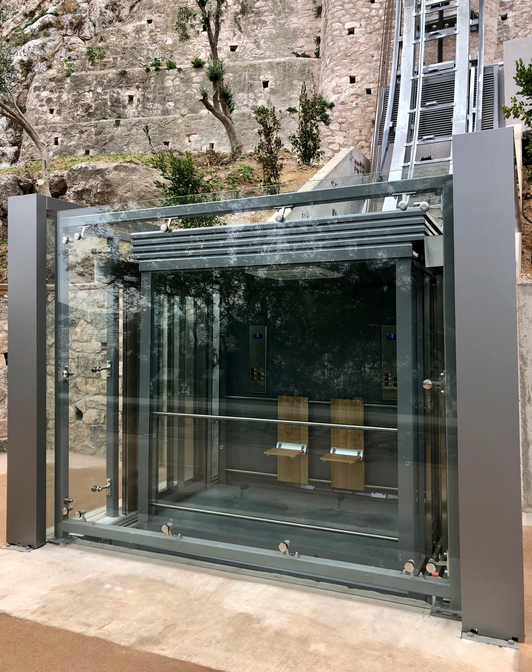 The journey of the Onassis Foundation began 45 years ago. To this day, it remains a journey towards the values ​​that unite people. These values ​​coexist thanks to the philosophy of the Foundation, as shaped by the legacy of our founder Aristotle Onassis: the liberation of forces in Greece that struggles, remains anxious and recognizes itself in culture for all. That is why the routes of people with mobility impairments, as well as the functional slope lift, which was undertaken by the Onassis Foundation in collaboration with the State, become the most appropriate symbolism for these values.

Today, on the International Day of Persons with Disabilities, we stand in front of a monument of universal value, a beacon of optimism and equal rights. In all our actions, in the fields of Culture, Education and Health, we act as partners, and not as mere financiers. The Onassis Foundation is not a simple "individual" that makes sponsorships but participates equally in the whole process of planning and implementing any action it undertakes. In this way we build bridges of cooperation, we release the hidden forces of Greece at its best.

The Acropolis, which makes the world bathe in its new enlightenment from our recent collaboration with the State, remains a constant reminder that man is the measure of all things. It also remains a promise that democracy is the home of us all. Especially in the conditions we live in today, this house must always be open, accessible and bright.

Almost twelve months ago, Mr. Prime Minister, we had a first meeting with the Minister and discussed this very project. Twelve months later and with four months of lockdown in Italy, because that affected us, the lockdown of Italy, we deliver to the State this difficult and demanding task. With absolute respect for the importance of the Acropolis, not only for us Greeks but for everyone.

In closing, I would like to thank the Minister of Culture, Lina Mendoni, the members of KAS, Professor Korre and their collaborators, Chronis Lillis, project manager of the project on behalf of the Onassis Foundation, the company Maspero Elevatori, his company Mr. Konstantinos Papadopoulos who built this innovative elevator and those who worked to complete the project. Thank you very much." 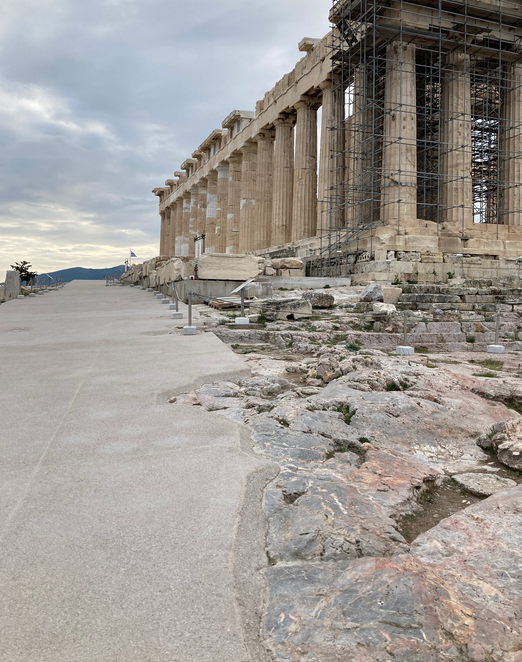 In September 2019, there was a consultation and agreement between the Ministry of Culture and Sports and the Onassis Foundation to undertake the donation of the upgrading works of the services provided in the Acropolis of Athens and the surrounding monuments. The donation included:

All projects were carried out in close cooperation with the services and external collaborators of the Onassis Foundation with the competent services of the Ministry of Culture and Sports and the Scientific Committee for the Preservation of Acropolis Monuments, in accordance with the provisions of Law 3028/2002 "On the protection of Antiquities and in of Cultural Heritage ".

Technical data for the slope lift

- The slope lift replaces the construction site elevator, which was installed in 2004 on the north side of the Acropolis, on the occasion of the Olympic Games, in order to make it possible for the disabled to visit the Holy Rock. At the same time, a construction corridor was constructed from the exit of the elevator to Panathinaion Street, north of the Parthenon, so that people in wheelchairs can at least see the monuments. The elevator started to present serious problems in its operation already from the beginning of 2018. As early as the autumn of 2018, scenes of transport of the disabled "in the hands" of the staff of the Ministry of Culture or by their attendants were recorded. From the spring of 2019 the elevator was almost not working, while the problems intensified in the summer of 2019, resulting in the country being exposed internationally, as people with disabilities from all over the world arrived at the monument and could not ascend the monument.

- This is a variable angle lift, manufactured by the Italian company MASPERO ELEVATORI. Its capacity is 1300 kg payload, i.e. two wheelchairs with two attendants or an ambulance stretcher with one attendant. The choice of the type was made according to the topography of the area and the geotechnical data, based on the construction studies which were prepared for the project. It is certified by the international company TUV, as defined by the European Regulations on slope lifts. It is noted that a similar elevator does not exist in any other monument. It is the only one in the world because structurally its variable angle is close to the right one, while its perimeter glass lining offers a unique panoramic view.

- The time required to ascend or descend the elevator is 32 seconds. With the old elevator, in order for the user to reach from the street level to the Acropolis monument, he had to climb to the level of the current engine room from an external staircase, using a stair platform lift and then using the old elevator to the top. This technology was technically completely obsolete even as a construction site lift. Spare parts were missing and everything needed was made as home-made.

- At the technological level, the new slope lift is highly advanced, offering comfort, speed, safety as well as safety valves during operation, in case of power failure or other unforeseen problems.

- In case of power failure, it is possible to go to the level of the entrance to the road by using alternative means of operation of the elevator (battery). Through a dual GSM card notification system, communication is made with five programmed receivers for any fault or emergency. The system is activated automatically in case of damage, seismic vibrations, wind, ice or entrapment and sends immediate notification to those responsible for the proper handling of each case. It is noted that in cases of very low temperature, the elevator automatically moves on the tracks every 10 minutes, so as not to allow a layer of ice to accumulate on its drivers.

- For the implementation of the required works, there was a team of supervising archaeologists of the Ministry of Culture, Culture and Sports throughout the execution of the project, with the cooperation of which all the measures that ensure the protection of the monuments were taken. The installation required infrastructure work, including partial excavation, drilling and installation of 35 stainless steel anchors on the Balano wall and filling with grout to support the metal supports supporting the elevator tracks. Also, the old platform [at the top] was removed and the new one was placed, 12.90m long and 1,60 to 1,90m wide.

Information on the new routes for the disabled 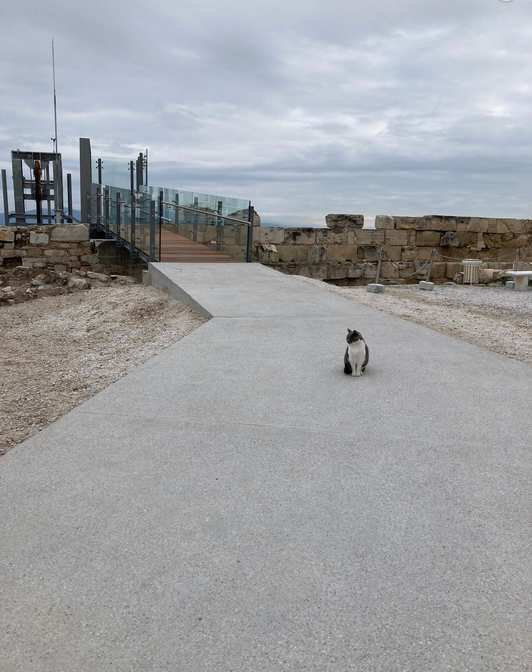 The new routes for the disabled cover the North and East side of the Parthenon, with the aim of making it possible for the disabled to tour the monuments of the archaeological site, after arriving by elevator.
The total length of the new routes is 500m. The configurations, horizontally and vertically, follow the archaeological specifications, restoring the ancient route of the Panathinaion Street.

The routes connect the upper exit of the slope elevator with Panathinaion Street, up to the area of ​​the old museum. Therefore, they extend in front of the Propylaea, from the Parthenon and reach the South Slope.

As clarified by the Ministry of Culture, the material chosen for the paving, as aesthetically acceptable, is architectural concrete with a cement content of only 12%. The end result is an artificial stone, corresponding to the materials used to complete the monuments. The materials were evaluated with on-site test applications by the Acropolis Monuments Conservation Committee. The whole project is completely reversible. 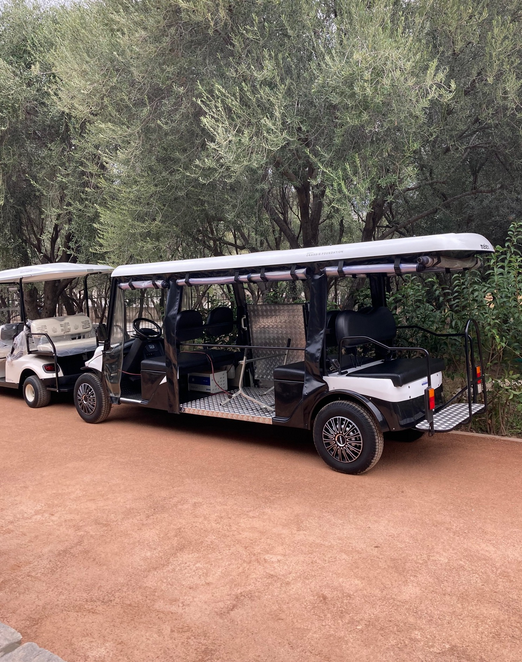