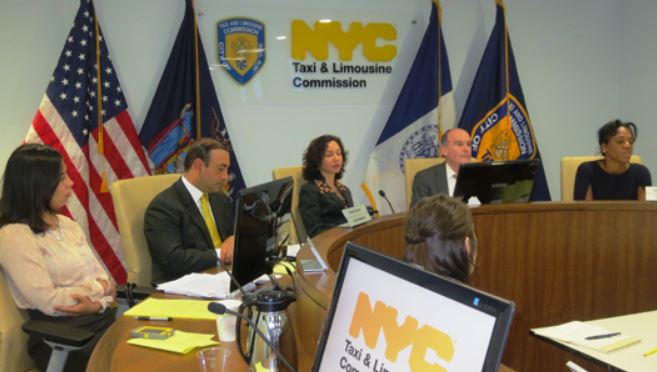 TLC chair Meera Joshi said the price increase will help ensure that more hails can be served and it will make the fleet more efficient.

"The actions taken today by the Taxi and Limousine Commission as a unified body represent the most significant advancement in equality for persons with disabilities in the taxi industry's history," she said.

The TLC said it will use the money collected from the surcharge, which goes into effect starting Jan. 1 for both yellow and green cabs, to pay for the cost of retrofitting the cabs.

Joshi told the TLC board that half of the yellow cab fleet will be wheelchair accessible by 2020.

Yesterday's vote came after years or protests and legal battles from New Yorkers who use wheelchairs and accessibility advocacy groups who said the city wasn't doing enough to meet their needs.

Many of those residents testified before the vote and thanked board membersfor making progress in retrofitting the cabs.

"This is an awesome day," said Edith Prentiss, the vice president of the nonprofit group Disabled in Action. "The lack of accessible travel is very important in our lives."

There were a few speakers who were against the surcharge, claiming that it wasn't right for all taxi users to bear the cost of the upgrades.

George Lazlo, who doesn't use a wheelchair, said he agreed that taxis needed to be more accessible but added regular New Yorkers are already paying high fees for other services.

Mayor Bill de Blasio, however, said the cost was "fair and equitable."

"Our transportation systems should open doors, not close them," he said.

Download the NYC Taxi and Limousine Commission Press Release in PDF format from the right-hand panel.