At MITA International Meeting for Accessible Tourism OF GITANDO.ALL - The basis for the development of accessible tourism and leading European tourism. 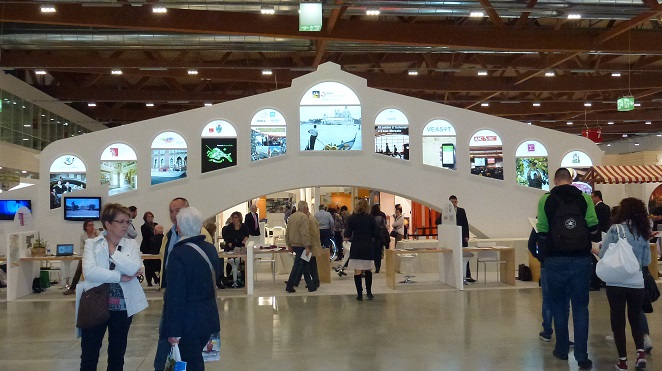 Photo: Region of Veneto Stand at GITANDO ALL 2014 (ENAT)

At MITA International  Meeting for Accessible Tourism OF GITANDO.ALL - The basis for the development of accessible tourism and leading European tourism.

Vicenza, 5th April 2014 – great participation at MITA, meeting for comparison and discussion of views on Accessible Tourism titled "UNIVERSAL FOOD FOR ALL: a combination of physical accessibility and special  needs of tourists", took place yesterday afternoon at Gitando.all, Tourism and Holiday Exhibition for All at  Fiera di Vicenza open till Sunday. The meeting has been organised by V4A®, Regione del Veneto and Fiera Di Vicenza in cooperation with the United Nations World Tourism Organisation (UNWTO) with the sponsorship of the European Commission, European Network for Accessible Tourism (ENAT) and EXPO 2015.

“MITA was born to bring to Italy the best international practices about Accessible Tourism and to let businessmen, stakeholders, politicians and institutions know them; it has become a very important date in its 4th year. Italy is going towards EXPO 2015 titled “Feeding the Planet”, that’s why we have decided to deal with the subject of nutrition, focusing on specific needs linked to nutrition and Universal design, in step with the "Advice on accessible tourism" adopted by UNWTO in 2013, that means the respect for people needs”, explains Roberto Vitali, President of V4A®, who was the moderator of the first part of the meeting presenting the opening speeches of the national and international authorities.

After the showing of the video “Italia – Open for Everybody” , directed by Aldo Bisacco and produced for the Communication Campaign (national and international) on Accessible Tourism 2013 by the Ministry of Tourism, the speech of Matteo Marzotto, President of Fiera Di Vicenza: “Since 2009, first year of Gitando.all, I have discovered that Accessible Tourism is not just civilization but also  an economic opportunity, as my friend Roberto Vitali taught me; he and V4A® have created the International Quality Brand on Accessible Tourism. Tourist entrepreneurs must understand that at the same cost they can host all tourists, we have to make our Country become a network of excellent Hospitality. I have seen this fair grow and it has become an international meeting and an innovation stage with the workshop BIFA – Buy Italy for all – in whom lot of international buyers interested in the Italian Accessible Tourism have taken part. (read here the press release). Gitando.all is a unique Exhibition in Europe and we want it to keep growing ”.

Besides the greetings of the Minister Franceschini from Paris, where he was meeting the European Ministers of Culture, at MITA we have seen the video message of Taleb Rifai the Secretary General of UNWTO – World Tourism Organization – “Accessibility is the across-the-board element of a policy of  responsible and sustainable tourism. Accessible Tourism is both an ethical imperative and a business opportunity: everyone benefits from it, not just people with disabilities or specific needs. That’s why Accessible Tourism, as stated in the UNWTO Accessible Tourism Recommendations 2013, has become an important  Mission for our future”.

UNWTO and ENAT informed the conference about the first World Summit on Destinations for All, to be held on 19 - 22 October 2014 in Montréal, Canada, where Veneto Region, Village for All and other key actors around from around the world will gather and share resrecah finds and best practices.

Also the European Commission took part in the meeting: Massimo Baldinato of the Cabinet of Antonio Tajani, has confirmed the willingness of the European Commission to work on the development of Accessible Tourism, highlighting the message that has to convey to tourist entrepreneurs: “giving more quality to Tourism means increasing the satisfaction of all tourists, developing a tourism that seeks excellence”.

Flavia Maria Coccia, President of the Committee for the Promotion of Accessible Tourism, was here today; the Committee started again its activity here at Gitando.all yesterday after a year of break “Our Country has to become Hospitable, not accessible, because accessibility is not a goal, it’s an assumption. In order to achieve this, it is necessary to transform words into action: after the writing of the Manifesto on Accessible Tourism 2010, the White Book on Accessible Tourism 2013 and the Communication Campaign “Italia – Open for Everybody”, the Committee is willing to make itself available to start doing facts: it is a big opportunity, because together we can revolutionise this Country”.

Roberto Vitali has used the occasion of MITA to launch the “save the date” for the first European Meeting about Accessible Tourism that will take place in San Marino on November 19th  with UNWTO, bringing the greetings of the Secretary of State  Teodoro Lonfernini.

In the second part of the debate, an interesting and lively Forum discussion moderated by Ivor Ambrose Executive Director of ENAT – European Network for Accessible Tourism –  took place with the participation of Victor Calise, Commissioner of the Mayor's Office for People with Disabilities, New York, Karen Staley, Vice President of the International Association of Amusement Parks and Attractions, (IAAPA Europa), José-Luis Borau, Fundación ONCE,  Antonello De Medici, President of Federturismo Veneto and Managing Director at Starwood Hotel Resorts & Worldwide and Alberto Zamperla, President of Antonio Zamperla S.p.A.
who have brought the best international practices about Accessible Tourism.

Today as well we have been talking about Cooking  for all at Cooking Show for All, with the chef Omar Papait and Fabrizio Nonis who have prepared appetizing vegetable- and fish-based dishes, with particular attention to tourists’ needs with food intolerances; Roberto Vitali and Andrea Stella, commentators of the event, have launched the official candidacy of Omar Papait to enter Masterchef kitchens as next competitor.

Andrea Stella is a tireless operator for the rights of people with disabilities; for his last feat, the navy cross of the Atlantic Ocean with the accessible catamaran “The Spirit of Stella”, during which he has been supported also by Gitando.all and V4A®, he has lifted on the sails the “Convention on the Rights of Persons with Disabilities” and the “Manifesto for the Promotion of Accessible Tourism”. “Rights make waves in the ocean” , this is his motto, in the pursuit of the environmental sustainability and of the inclusion.

Testimonial of the day is the new giant slalom Italian Champion and Patroness of the Exhibition, Sofia Righetti.

Booth V4A® is in Pad. 7 n° 164: a SPECIAL DESK will be available for Hotels, Agritourisms and Camping in Veneto that would like to sign up in order to take part in the Veneto Region Excellence Project for Accessible Tourism

Here is the link to the Schedule of the events of Gitando.all 2014

Village for all – V4A® is the International Quality Brand Hospitality for all  that through information disclosed, guarantees to people with disabilities of mobility or sensory, food or environmental allergies, elderly people, dialysis, obese, for families with small children, to be able to make informed choices and informed, where spend their holidays. “ Everybody holidays”, this is the idea that led to the creation of the project Village for all – V4A®, that works with one aim: promoting the Accessible Hospitality, the social inclusion and the right to holiday for everyone. Accessible Hospitality means the set of services and facilities that allow people with specific needs to enjoy their holidays and free time without obstacles and difficulties. They are considered “specific needs” not only those of people in wheelchairs but more generally of those who have reduced, permanent or temporary, mobility; sensory limitations (blindness or deafness), food allergies or intolerances, diabetic people, dialysis and obese people but also needs of that great part of population consisting in elderly people and families with children. Village for all – V4A® certifies under its own Brand tourist facilities able to offer Accessible Hospitality for all. It guarantees an attentive, reliable and precise information, personally checking each structure before the joint, ensuring information on measures and dimensions, without issuing " accessibility  licenses” but giving people the chance to independently choose their holiday in the structure that will better meet the needs of the individual and his family.

Roberto Vitali is from Ferrara, a small city near Bologna. He is 54 years old, he has a wife and a daughter. He is registered with the publicist journalists of the Emilia Romagna Region. A moto accident in January 1976, when he was 15, made him paraplegic. Since that moment, Roberto Vitali undertook a long series of activities and projects. Passionate about sports, was Italian champion in Olympic kayaking and in slalom in the early 90s. Since the 90s he has been promoting initiatives about accessible tourism. In Ferrara he has created the first "Informa Handicap" office. He is technical referent for the FISH (Italian Federation for Overcoming Handicaps) for the Tourism sector. Emeritus president and founder of SiPuò (National Laboratory on Accessibile Tourism), of which he was president until 2008. He is actually president and founder of Village for all – V4A® (www.V4A.it ). He is a member and spokesman of the Commission for the Promotion of Accessible Tourism to Ministry of Tourism since 2010. He is co-inventor of the system V4AInside .

For more info: Village for All – V4A® Press Office