With a total of 76 goals scored at UEFA EURO 2012, the official tournament charity, the Centre for Access to Football in Europe (CAFE) will receive €228,000 as a donation from UEFA. 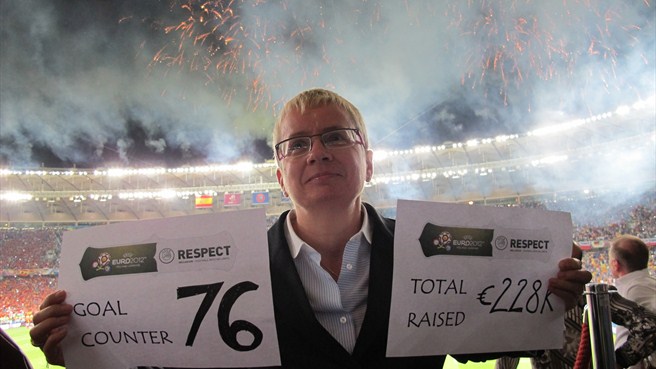 With a total of 76 goals scored at UEFA EURO 2012, the official tournament charity, the Centre for Access to Football in Europe (CAFE) will receive €228,000 as a donation from UEFA.

Every goal scored at UEFA EURO 2012 has brought cheers of delight from the official tournament charity, the Centre for Access to Football in Europe (CAFE).

UEFA pledged to donate €3,000 for each goal in Poland and Ukraine – and with the ball finding the net 76 times, CAFE have received €228,000 to help fund their work to improve access and facilities for disabled fans at football matches.

As part of the Respect programme at UEFA EURO 2012, UEFA has been working in conjunction with CAFE to manage separate Respect Inclusion initiatives, and football supporters and other interested parties are being encouraged to donate money.

CAFE was launched via UEFA's CHF1m charity cheque in 2009 to promote and ensure equal access across the territory covered by UEFA's 53 member national associations. It provides backing, guidance and advice to partners and stakeholders, including UEFA, national associations, leagues and clubs, disabled fans and disabled supporter groups.

"It's been an incredible tournament for CAFE and Respect Inclusion, and we'd like to say a huge 'thank you' to UEFA for appointing us as the official charity of EURO 2012 and to everyone who donated," said CAFE managing director Joyce Cook. "In doing so, UEFA has not only ensured its own generous funding donation, but has also helped us to shine a bright light on the important topic of inclusion and access for disabled fans.

"Without good access, disabled people are quite simply excluded from social events such as football," she added. "We will use all the funds raised to build on the groundbreaking work already undertaken with local partners in the region, so that even more disabled fans can enjoy live matches in the future. One final time, a huge 'thank you' from us all."

The work on improving access to sports facilities for disabled people now goes on after UEFA EURO 2012's final whistle. CAFE will continue its work with local partners in Poland and Ukraine, leaving a long-lasting legacy in the two host countries. In particular, funds raised will be invested in the maintenance of audio-descriptive commentary during matches for blind and partially-sighted football supporters in the co-host nations.

Donations are welcomed for the following reasons:

For more information about CAFE and how to donate, visit the CAFE website