The 5th European Greenways Awards for trails built along former railway lines were awarded during the official ceremony in Épinal, the Vosges, (France) during the "15th Rencontres des Départements & Régions Cyclables" de France.

The 5th European Greenways Awards for trails built along former railway lines and canal towpaths were awarded during the official ceremony in Épinal, the Vosges, (France) during the "15th Rencontres des Départements & Régions Cyclables" de France.

Eight greenways from France, Ireland, UK, Italy and Spain were awarded as reference of best practices in Europe.

This 5th European Greenways Award (EGA) has been organized by the European Greenways Association (EGWA) in cooperation with the association Départements & Régions Cyclables (DRC) de France and the Conseil Général des Vosges, with the support of the DG of Enterprise and Industry of the European Commissionand Council of Europe / European Landscape Convention, the Ministère de l’Écologie, du Développement Durable, des Transports et du Logement(France) and the Walloon Region(Belgium).

The European Greenways Awards (EGA) contribute to the promotion of best practices in greenways. It encourages the qualitative development of these facilities opened to the general public in Europe, defined as “Communication routes reserved exclusively for non-motorised journeys. These routes should meet satisfactory standards of width, gradient, and surface condition to ensure that they are both user-friendly and low-risk for users of all abilities. In this respect, canal towpaths and disused railway lines are a highly suitable resource for the development of greenways”

The European Greenways Awards (EGA) were created in 2003 and have since been heldevery two years . In this 2011 edition the jury have honouredprojects in two categories: “Excellence” and “ Exemplary Initiatives”.The EGWA has been delighted to receive 20 exceptional candidates from 10 countries.

The international Jury for the 5th EGA met in Brussels on the 28th of June to select 3 winners for each of the 2 prize categories. The Jury Members were:

Given the high quality of the presented candidacies and after careful consideration, the members of the Jury chose to add two awards: one "Special Prize of the Jury" and a second third prize in the category of "Exemplary Initiatives”.

The awarded candidacies are: 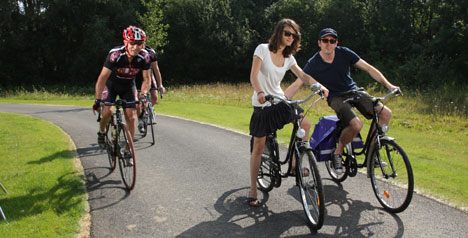 Green Avenue. Photo Benoit Decout
1stPrize: Green Avenue – Avenue Vert e (France) / Département de Seine-Maritime
For the excellent quality of the Greenway as a whole and its appeal to tourists, and its future plans for international connection.

2nd Prize: Parco costiero del Ponente Ligure (Italy) / Area 24 SpA
For the integration of an excellent Greenway in a very attractive and territorially complex setting on the Mediterranean coast.

3rd Prize: Worcester Connect2 Greenway (UK) / Sustrans
For the excellence of its conception, design and technical execution as a Greenway, especially its magnificent bridge, which enhances the daily mobility of all kinds of users.

Special Prize of the Jury:
Great Southern Trail, GST (Ireland) / GST Ltd
In recognition of the efforts made for the last 20 years by the volunteer enthusiasts of the GST who, with their tireless endeavour, have succeeded in making reality the conversion of a dissused railway line into a Greenway to be enjoyed by all.

1st Prize: Discover the Secrets of Girona Greenways (Spain) / Consorci Víes Verdes de Girona
For an innovative action with major impact on the outreach and promotion of the Girona Greenways as a resource for discovering the cultural and natural value of the region.

2nd Prize: Padiham Greenway Creative Engagement Program (UK) / Mid Pennine Arts
For the use of Greenway and art as a tool for social integration and cohesion in a difficult socio-economic environment.

3rd Prize: Sentiero della Bonifica(Italy) / Provincia de Arezzo
For the development of a cycling and walking tourism product in Tuscany that allows users to enjoy nature, the art of bygone days, and human contact, taking advantage of a historic work of hydraulic engineering.

The organization wishes to thank all the candidates for the quality of their work and the effort done to provide very helpful information to the jury.