Taipei, April 12 (CNA). President Ma Ying-jeou on Tuesday praised the strides Taiwan has made in developing a barrier-free environment to promote accessible tourism but acknowledged that more needs to be done. 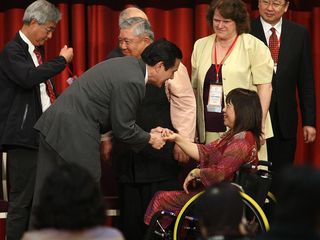 Taipei, April 12 (CNA). President Ma Ying-jeou on Tuesday praised the strides Taiwan has made in developing a barrier-free environment to promote accessible tourism but acknowledged that more needs to be done.

Speaking at the 4th International Conference on Accessible Tourism in Taipei, Ma said Taiwan was working to create an environment where the physically challenged, senior citizens, and children could enjoy an accessible vacation.

"Although we have a complete law to protect the rights of the disabled, there is still room for improvement in its execution, " he said at the opening of the two-day conference called "Accessible Living Drives National Development."

There are 1.08 million people in Taiwan with either physical or mental disabilities and 2.48 million senior citizens, all of whom require an accessible living environment, encompassing tourism, assistive devices, transportation, and housing, the president said.

Ma cited steps taken in Taipei City as examples of progress made in providing a more accessible environment, including promoting barrier-free facilities such as accessible ramps and washrooms and flattening 121,100 square meters of walkways covered by building overhangs along Taipei streets.

One of the conference's 200 participants said that traveling to other areas of Taiwan, however, remained difficult for those with disabilities.

"The gap between platforms and public transport vehicles, like trains and buses, should be redesigned, " said Taipei City resident and wheelchair user Hanmer Fu, who relies on the train to travel with his wife to suburban areas for weekend getaways.

He also suggested that the government develop a taxi network catering specifically to the physically challenged.

"We are often caught in a difficult situation after leaving the train station because no taxi drivers are willing to take us deeper into cities," he said.

The Taipei City government, one of the first to launch a dedicated taxi service for disabled persons, now has 168 taxi vans available to those who apply to use it.

Though the rate is only one-third the normal taxi price, it has to be booked days in advance, which is still inconvenient for those who need help getting around.

The Ministry of Transportation and Communications set up a barrier-free transportation task force in January that aimed to provide more low-floor city buses by the end of the year and make 40 more train stations around the country more accessible.

To plan accessible travel, the Eden Social Welfare Foundation, which organized the conference, has published a booklet that lists 38 tourist attractions, 16 restaurants, 16 accommodations, 12 tour itineraries, and 15 museums considered to be accessible.