The Spanish Committee of Representatives of Persons with Disabilities (CERMI) and ONCE Foundation presented the Eurotaxi White Paper "A Taxi for All" in Málaga on 2nd February 2011. The paper analyzes the main issues and lines of action for the design of taxis and implementation of accessible taxi services in all Spanish municipalities.

The Spanish Committee of Representatives of Persons with Disabilities (CERMI) and ONCE Foundation presented the Eurotaxi White Paper "A Taxi for All" in Málaga on 2nd February 2011. The paper (- a book of 249 pages, available in Spanish only), analyzes the main issues and lines of action for the design of taxis and implementation of accessible taxi services in all Spanish municipalities. 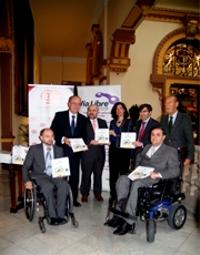 ONCE Foundation and CERMI (Spanish Committee of Representatives of Persons with Disabilities) presented in Malaga the Eurotaxi White Paper "A taxi for all". This is a document that analyzes the main problems identified by stakeholders in this sector and the action lines proposed for the implementation of accessible taxis in all municipalities.

The event was attended by Mayor of Málaga, Francisco de la Torre, the representative of IMSERSO, Elena Martín-Asin, Executive Vice President of Fundación ONCE, Alberto Durán, CERMI President, Luis Cayo Pérez Bueno, and the director of Universal Accessibility ONCE Foundation, Jesus Hernandez, the latter being responsible for developing the document.

Hernandez explained the objective of the White Paper. Eurotaxi was a pioneering project led by the ONCE Foundation in collaboration with the IMSERSO to get a standard taxi service. "Twenty years after the start of the project," said Hernandez, "we are concerned that this service is still not built in a sustainable manner."

In particular, he referred to legislation which provides for the implementation of accessible taxis in Spain, which should reach 5% of the total taxi fleet in 2017, which will roughly quintuple the number of those currently available. It is acknowledged that, currently, only Palma de Mallorca has achieved the 5% while the remaining municipalities are well below the national average which stands at 1%.

The paper responds to the ONCE Foundation’s bid to improve the quality of life of persons with disabilities, a question which he considers essential to continue to promote accessible transportation, including taxi mode for all or Eurotaxi.

The White Paper summarizes the procedures, discusses the perspective of various actors and describes the strategies to position the accessible taxi service in Spain among the most competitive and sustainable Europe.

Specifically, the perceived disadvantages or problems that users have are to do with the difficulty in the application of the service, price, long waiting times (and very early booking) due to the fleet shortages and lack of uniformity of service from one municipality to another.

For its part, the industry is concerned about accreditation systems, security and comfort of the dwellings and the costs of adaptations. Ignorance of the rules and lack of training and information are other deficiencies highlighted in the document.

Therefore, the White Paper sets out a series of proposals to improve provisions, first, by creating a system of recording data about the fleet of accessible taxis.

Economic measures that facilitate their use by taxi providers, incentives, accessible communication and booking systems, economic and tax advantages for professional cab drivers, improvements in the operation of the license, loyalty and performance are other lines of work.

Finally, it also reflects the need to launch campaigns for professional training and awareness and information to users to try to increase demand for this service. As Jesus Hernandez recalled, the Eurotaxi can be very useful for all citizens, not only for elderly or disabled persons. 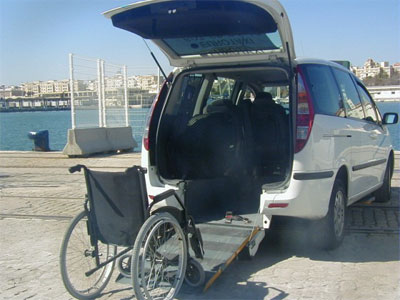 Photo of Eurotaxi by www.eurotaximalaga.com

Following the presentation, the Executive Vice President of Fundación ONCE, Alberto Durán, referred to the publication of this White Paper as an opportunity to remind everyone about the situation now, seven years before the closure of the legal term, "…with much room for manoeuvre so that appropriate solutions are found and nobody is left out of the game. "

"If nothing is done we will not meet the target for 2017. Much has been done in the passenger transport sector but there is still much room for improvement for the rights to mobility for persons with disabilities is not something contained in a standard", he said.

In the same vein, CERMI President, Luis Cayo Pérez Bueno, said the current balance "is chiaroscuro." He said progress has been "idling" because at that rate we will not reach compliance in 2017. In our opinion, it is necessary to be "more ambitious" and go for a taxi for everyone. "Getting to ensure that all taxis are accessible from the start and forgetting about quotas."

Finally, the Mayor of Malaga, Francisco de la Torre said that this document is "an opportunity to reflect and take a drive, leading to the possibility of a taxi for everyone. This is the message that the user knows and is asking for, also for the good of the industry" he said.

The development Eurotaxi White Paper has enjoyed the cooperation of the FEMP (Spanish Federation of Municipalities and Provinces) and IMSERSO. On behalf of IMSERSO, Elena Martín-Asin expressed her hope that this document will be of great use in developing and promoting this service.

Fundación ONCE is a Founding Member of ENAT