This is a brief comment in English about Responsible Tourism in FITUR, since I know some people who don’t read Spanish will be interested.FITUR is the annual International Tourism Trade Fair held in Spain. 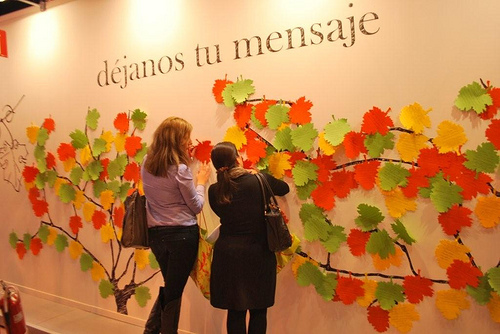 This is a brief comment in English about Responsible Tourism in FITUR, since I know some people who don’t read Spanish will be interested. FITUR is the annual International Tourism Trade Fair held in Spain.

Unfortunately, in the 2011 edition of Fitur [19 - 23 January] not much happened regarding Responsible Tourism. As I previously commented, while other equivalent European tourism fairs like ITB or WTM dedicate a whole day to the topic of Responsible Tourism, the main focus in Fitur was on saving energy (and money) in what was called “Fitur Green”.

A software called e-toolkit Hotel Energy Solutions was presented with the support of the UNWTO and Mr. Taleb Rifai, its Secretary General. A similar energy solution was presented by the Spanish Instituto Tecnológico Hotelero. In this respect, the Andalusian chain Fuerte Hoteles seems to be taking its sustainability very seriously.

Although big hotel chains like Melià and NH emphasize their CSR, it is fair to say that the Spanish tourism sector altogether lays behind regarding issues as accessibility or environmental impact. While British or German tourism business have acknoledged (at least part of) their share of responsibility upon sustainability issues, the truth is that Spanish businesses in general are still enjoying the positive image which tourism has been enjoying in Spain.

Koan Consulting took part too, mentioning its work supporting the ECPAT sex tourism campaign and with female tourism entrepeneurs in São Tomé and Príncipe. Our friends of the site Ecotumismo (kinda of ecoyourself) presented a record of his short but intense life promoting Responsible Tourism. The Jane Goodall Institute, which works on protecting fauna with the help of ecotourism, presented an agreement with CERES, a rural ecological accommodation network, based in Asturias.

The Spanish bank Banesto was present with a stand to promote its project “Turismo Solidario y Sostenible”, which articulates tourism network in Africa and Latin America, based in accommodation businesses run by female entrepeneurs.

Regarding accessible tourism, Predijif, the Spanish platform of disabled associations, showed some tourist guides with accessibility information while other local destinations started to introduce timidly more and more information on accessible tourism. Redestable, which groups Spanish companies specialized in accessible tourism held a stand and presented multiple solutions aimed to solve some of the many problems disabled people face when they go on vacations.