5 January 2011, Brussels. Following formal ratification on 23 December 2010, the EU has - for the first time - become a party to an international human rights treaty: the United Nation's (UN) Convention on the Rights of People with Disabilities. The Convention aims to ensure that people with disabilities can enjoy their rights on an equal basis with all other citizens. 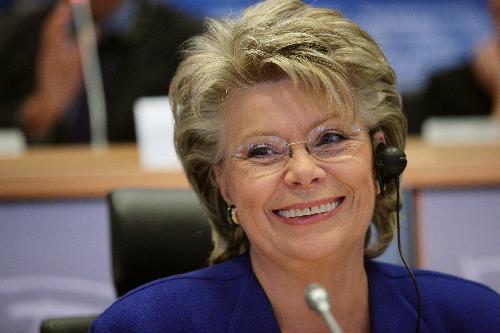 Following formal ratification on 23 December 2010, the EU has - for the first time -  become a party to an international human rights treaty: the United Nation's (UN) Convention on the Rights of People with Disabilities.

The Convention aims to ensure that people with disabilities can enjoy their rights on an equal basis with all other citizens.

It is the first comprehensive human rights treaty to be ratified by the EU as a whole. It has also been signed by all 27 EU Member States and ratified by 16 of these. The EU becomes the 97th party to this treaty.

The Convention sets out minimum standards for protecting and safeguarding a full range of civil, political, social, and economic rights for people with disabilities. It reflects the EU's broader commitment to building a barrier-free Europe for the estimated 80 million people with disabilities in the EU by 2020, as set out in the European Commission's disability strategy.

"Good news for the new year and a milestone in the history of human rights as it is the first time ever that the EU becomes a party to an international human rights treaty. I would like to thank the Belgian Presidency for their excellent cooperation, which allowed the swift and successful conclusion of the ratification process," said European Commission Vice-President Viviane Reding, the EU's Justice Commissioner.

"The UN Convention promotes and protects the human rights and fundamental freedoms of persons with disabilities. In November, the Commission presented an EU disability strategy for the next ten years: concrete measures with a concrete timeline to implement the UN Convention. I now call on all remaining Member States that have not yet ratified the Convention to do so swiftly. It is our collective responsibility to ensure that people with disabilities do not face additional obstacles in their everyday lives."

The EU signed the UN Convention on the Rights of People with Disabilities on its opening day for signature on 30 March 2007 (IP/07/446). It has since been signed by all 27 EU countries and a further 120 states worldwide. Following completion of the ratification procedure, the EU as a whole is now the first international organisation which has become a formal party to the Convention (as are 16 EU Member States too).

The Convention commits parties to making sure that people with disabilities fully can enjoy their rights on an equal basis with all other citizens (MEMO/10/198). For the EU, this means ensuring that all legislation, policies and programmes at EU level comply with the Convention's provisions on disability rights, within the limits of EU responsibilities.

Ratifying countries, such as the EU Member States, should take action in the following areas:

Parties that have ratified the Convention will need to periodically inform the UN Committee on the Rights of Persons with Disabilities about the measures taken to implement the Convention. The Committee, composed of independent experts, will highlight any shortcomings in the Convention’s implementation and make recommendations.

The EU's disability strategy for 2010-2020 focuses on empowering people with disabilities to enjoy their rights on an equal basis with others and on removing obstacles in everyday life. It also aims to help implement the provisions of the Convention in practice, both at EU and national level. The strategy complements and supports action by the Member States which have the main responsibility in disability policies.

One in six people in the European Union – around 80 million – have a disability that ranges from mild to severe. Over one third of people aged over 75 have disabilities that restrict them to some extent. These numbers are set to rise as the EU population grows progressively older. Most of these people are all too often prevented from fully participating in society and the economy because of physical or other barriers, as well as discrimination.