19 November 2014, San Marino. Policies and measures to promote universal accessibility in tourism will be at the centre of the 1st UNWTO European Conference on Accessible Tourism, jointly organized by UNWTO and the Government of the Republic of San Marino. 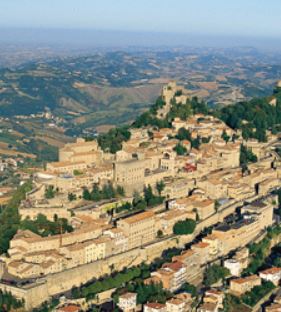 19 November 2014, San Marino. Policies and measures to promote universal accessibility in tourism will be at the centre of the 1st UNWTO European Conference on Accessible Tourism jointly organized by UNWTO and the Government of the Republic of San Marino.

The conference is being organized in recognition of the importance of accessibility in tourism, and will look at how to maintain and develop quality, sustainability and competitiveness in accessible tourism. The agreement to hold the conference was signed at ITB Berlin by UNWTO Secretary-General Taleb Rifai and Teodoro Lonfernini, Minister of Tourism and Relations with Public Utilities State Corporation of San Marino.

“Accessible tourism benefits everyone and advancing the rights and opportunities of people with disabilities should be seen as an opportunity as well as an obligation; UNWTO and the Republic of San Marino are both deeply committed to taking concrete action in this area”, said Rifai. “Accessibility has become a fundamental issue in tourism.

Many countries are devoting special attention to this topic and are adjusting their tourism systems and legislations. After being recognised as 2013 European Destination of Excellence (EDEN), San Marino is being offered by UNWTO the opportunity to focus on accessibility through the organisation of a European Conference in the Republic, which fills us with pride. This is a major challenge for the future that we all must meet”, said Lonfernini.

According to the World Health Organization 15% of the world population has a physical, mental or sensory disability. In its efforts to mainstream universal accessibility within the tourism sector, UNWTO works closely with disabled people’s organizations (DPOs). In 2013, the General Assembly adopted the Recommendations on Accessible Tourism for All which incorporate the most relevant aspects of the UN Convention on the Rights of People with Disabilities and Universal Design.

The 1st UNWTO European Conference on Accessible Tourism will be held alongside the 14th meeting of the World Committee on Tourism Ethics (WCTE), which recently declared accessible tourism for all one of its top priorities.

Further information about UNWTO activities related to Accessible Tourism is available at the UNWTO Ethics webpages.

The UNWTO is an Honorary Member of ENAT