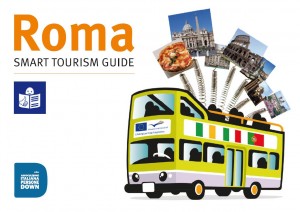 This project was funded by the European Commission under the Lifelong Learning Programme ( LLP) Grundtvig Learning Partnerships. The project was carried out from September 2011 to August 2013.

In Italy, 6 men with Down syndrome drafted the Rome guide and 10 men from the AIPD Sections of Bari, Treviso, Campobasso, Catanzaro, Caserta tested the guides in other countries.

In 2012 a meeting was held in Italy for planning and programming the work, attended by the editors of the participating organizations. The drafters wrote the first version of the guide of the city of Dublin in 2012.

On 31 May 2013, Rome Guide was presented at a conference held at the headquarters of Binary 95 in Rome. The event was attended by representatives of the world of tourism, institutions including the Ministry of Cultural Heritage, the Lazio Region and the Third Sector.

Visit the websites of the Smart Tourism project partners:

Download the Smart Guides to Dublin, Lisbon and Rome in several languages from the right-hand panel.

The project partner, Portuguese Down Syndrome Association, is a Listed Supplier at Pantou, the European Accessible Tourism Directory.